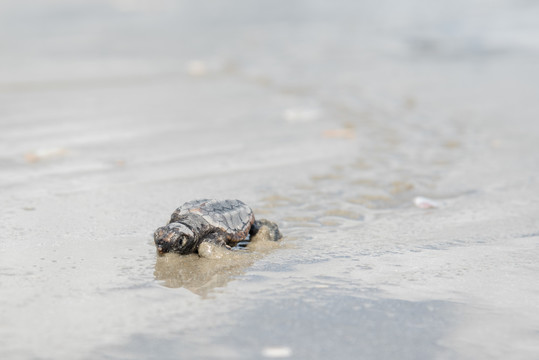 The season’s second sea turtle nest of the year became the first to hatch on Hilton Head Island on June 27. (Photo: Taylor Main/SCDNR)

CHARLESTON COUNTY, S.C. (July 10, 2019) — With several weeks of nesting season remaining, sea turtles have laid the highest number of nests on South Carolina’s beaches since recordkeeping began in the early 1980s.As of this July 10, staff and volunteers have counted 6,978 nests by ground survey across the coast. The previous record, set in 2016, was 6,446 nests.

The South Carolina Department of Natural Resources oversees a network of local sea turtle volunteer groups along the coast, many of whom have been reporting their own broken records in recent weeks. Volunteers and staff from Edisto and Kiawah Islands surpassed their all-time records on June 29 and 30, and beaches from Hilton Head Island to Garden City have since followed suit.

“This has been a tremendous season so far, and we are grateful for our dedicated network of volunteers in South Carolina who make this large-scale conservation effort happen,” said biologist Michelle Pate, who oversees SCDNR’s sea turtle program.

Hatching season has also recently begun, with the first hatch of the year occurring on Hilton Head Island on June 27.

The 2019 season has been marked by numerous unusual events, beginning with an early start date and including a nest laid by a Kemp’s ridley, the world’s most endangered sea turtle. Volunteers and staff have also documented a high number of so-called ‘day nesters,’ female sea turtles that come ashore in broad daylight to nest rather than under the typical cover of darkness.

“Day nesters tend to be pretty rare, isolated events,” said Pate. It’s not clear why so many females are nesting during daylight hours this year, but some possibilities include harassment during emergence at night and extremely dry sand conditions due to a lack of rain, which can hinder females from digging a nest cavity.

Record-breaking years have become increasingly common across the Southeast in recent years. Sea turtle biologists are optimistic that the increasing trend signals the beginning of recovery for loggerhead sea turtles (whose nests make up the vast majority of South Carolina nests), which were listed as threatened under the Endangered Species Act in 1978 due to steep declines in their numbers.

During this period when nesting and hatching seasons overlap, it’s especially critical for beachgoers and beachfront homes to respect the laws intended to protect sea turtles. Higher nest numbers bring higher chances of interactions between humans and sea turtles,

Both state and federal law prohibit the harm of or interference with sea turtles or their nests. Sea turtles perceive human beings as predators, and harassment encompasses any activity that changes a sea turtle’s natural behavior. That can range from approaching nesting females to get photos (which can cause turtles to return to the ocean and lose valuable energy) to ‘assisting’ hatchlings on their path to the ocean.

“Sea turtles are wild animals – let nature take its course and allow them to use these beaches like they have millennia,” said Pate. 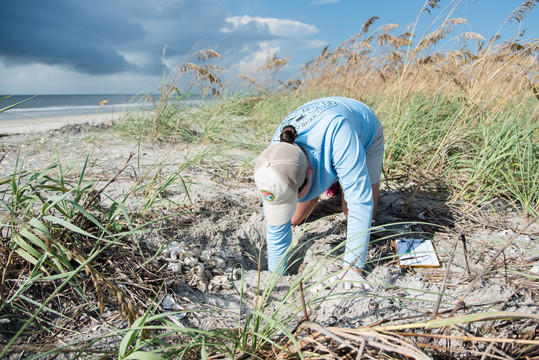 With the start of hatching season, SCDNR staff and volunteers along the coast will begin to inventory hatched sea turtle nests to determine the success of each nest. (Photo: Taylor Main/SCDNR)