JEFFERSON CITY, Mo. — The Missouri Department of Conservation (MDC) congratulates Bryant Rackers of Bonnots Mill for his impressive fishing after catching two more state-record fish. Rackers now holds state records for white perch and sauger, both of which caught on the Osage River in November.

Rackers has made a name for himself, as he already holds two other state records. He tied the record for skipjack herring Oct. 27. He’s also the current record holder under “alternative methods” for a blue sucker snagged in 2018.

“I’m pretty excited,” said Rackers. “It feels really good holding these records. Especially because there wasn’t a record for white perch, and this is the first alternative records method for sauger.”

Rackers was fishing with his pole-and-line Nov. 23 when he caught the perch.

“I was out with my girlfriend on the river that day and we were actually trying for walleye and sauger,” explained Rackers. “When I reeled it in, I thought it was a white bass. I looked at it and said, ‘Wait, it’s not a white bass or a hybrid striper. I think it’s a white perch!’ So, I checked the record and said, ‘Well, heck, it’s open!’”

The perch weighed in at 10-ounces. It was verified on an MDC-certified scale in Osage County.

One week later, Rackers went on to break yet another record – this one for sauger.

“Sauger is what I’ve been targeting for about three years,” Rackers said. “But I don’t anticipate holding this record for very long because it’s not that big of a fish.”

For his two latest state-record fish, Rackers said he’s mounted the white perch, but has other plans for his sauger.

“I’m hoping to break the sauger record again with a bigger fish,” he explained. “That way, it’ll be a little harder for others to break and I can stay in the record books a bit longer. That one I’ll mount.”

Rackers is no stranger to MDC’s Fisheries division. He holds a wildlife conservation degree and used to help raise fish at MDC’s Lost Valley Fish Hatchery in Warsaw. He said his fishing experience has contributed to his success, but he offered some advice for those looking to break state records.

“If you’re really determined to break a certain record, just stick with it,” Rackers suggested. “And don’t get discouraged if someone else gets the record before you do. My girlfriend wants to get a state record and that’s what I’ve been telling her. Keep sticking with it.” 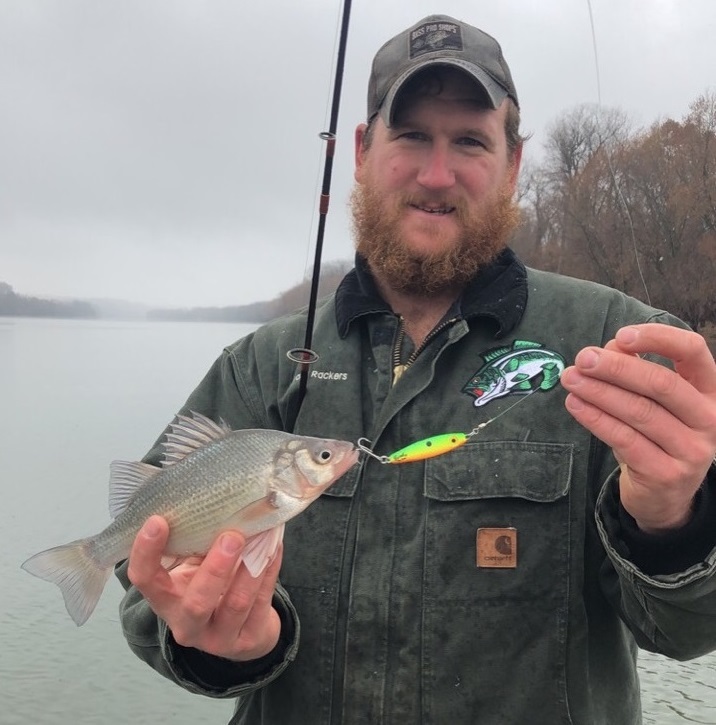