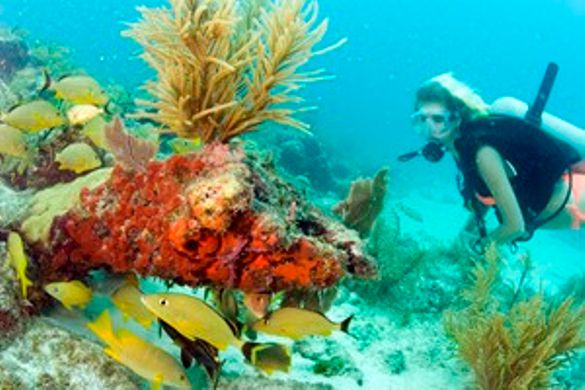 The National Oceanic and Atmospheric Administration (NOAA) and its Florida Keys National Marine Sanctuary have announced an intent to raise almost $100 million to restore seven iconic coral reef sites off the Florida Keys.

‘Mission: Iconic Reefs’ calls for restoring nearly 3 million square feet of the Florida Reef Tract, about the size of 52 football fields, one of the largest strategies ever proposed in the field of coral restoration, sanctuary officials said. NOAA officials said it would support the multi-decade effort and work with partners to secure public and private funds.

“We have identified some iconic reefs here in the Keys that we want to help restore,” said Sarah Fangman, the sanctuary’s superintendent, at a news conference in Key Largo. “These reefs have been suffering from a number of threats for years as have reefs around the world.”

“We anticipate funding to support this mission to come from a variety of sources,” she said. “State, federal, nonprofit and private partnerships, so it will take a number of resources.”

Since the 1970s, tropical cyclones, heat-induced coral bleaching, cold snaps and disease events have reduced coral coverage in the Keys.

The sites, officials said, represent a diversity of habitats, support a variety of human uses, span the full geographic range of the Florida Keys and show a high probability of success.

The restoration effort will incorporate a phased implementation approach over the next 20 years. The first phase will take about 10 years and focus on restoring elkhorn and staghorn corals, fast-growing species that have not been affected by the current outbreak of stony coral tissue loss disease, as well as incorporating resilient corals of other slower-growing species. At the sites, scientists are to remove nuisance and invasive species like algae and snails, and reintroduce sea urchins and crabs to help keep the reefs clean and healthy.

The second phase is to concentrate on introducing slower-growing, foundational coral species propagated from colonies that have survived or been rescued from bleaching and disease events. The goal is to restore diversity and ecological function to the reefs by returning coral cover at target reef sites to a self-sustaining level.

2020 also marks the 30th anniversary of the creation of the Florida Keys National Marine Sanctuary which comprises 2,900 square nautical miles of coastal waters around the island chain from Key Largo south to the Dry Tortugas.