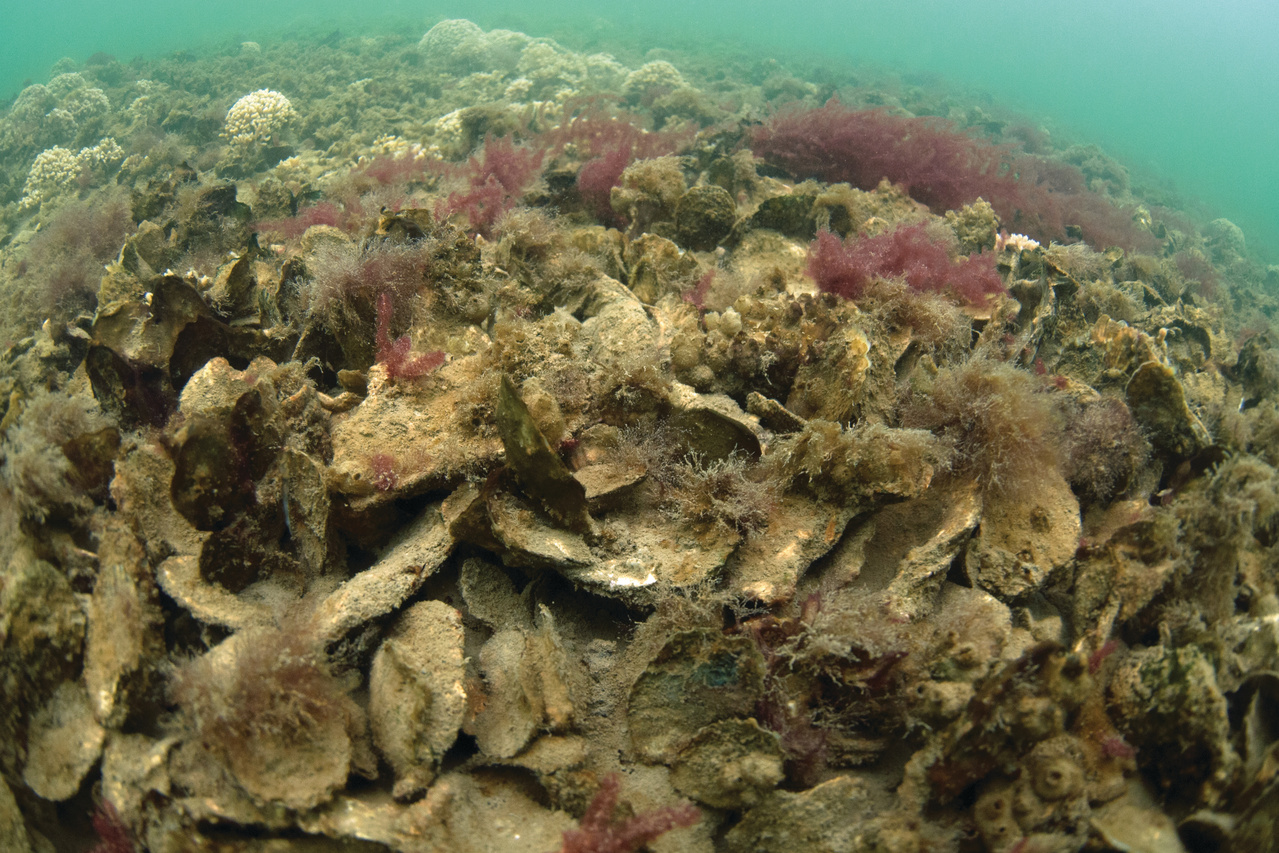 Oysters play critical roles in the Chesapeake Bay ecosystem—by filtering water as they feed and by providing habitat and forage for other Bay species. But only about 1 percent of the historic oyster population remains in Maryland due to overharvesting, habitat loss, and disease. So partners including NOAA are working to restore oyster reefs.

By restoring these reefs—and the functions they provide—what changes can commercial fishermen anticipate? And what do restored reefs mean for the economy in the region?

The Ecopath with Ecosim computer model was used to describe the interactions between species in the food web in the Choptank River complex on Maryland’s Eastern Shore.

Researchers found that a “mature oyster reef” scenario (roughly 15 years after restoration) could support about 45 percent more (in biomass) commercially harvested fish and crabs than are harvested under today’s “young oyster reef” scenario. They also looked at what happens when additional filter feeders that live on and near oyster reefs (such as anemones, barnacles, hooked mussels, and tunicates) are added into the mature oyster reef scenario. In that case, blue crab harvest in the Choptank River system could increase 80 percent relative to the current scenario—that’s 2.4 million pounds of crabs. Blue crabs would increase primarily because the food they prefer is often found in and around oyster reefs.

Having additional commercially important fish and crabs in the water could benefit the regional economy. The researchers used the IMPLAN (impact analysis for planning) economic impact computer model. It determined that for every dollar generated through increased dockside sales of harvested fish, there is an economic multiplier effect. That means an additional $1.07 in economic activity is generated in the form of employee wages, repair and maintenance expenditures at marinas, gear and bait, and the like. Models indicate that the scenario with mature (and therefore healthier) reefs with filter feeders could support 142 additional full and part-time jobs in the Choptank area. It could also enable an additional $9.9 million in total sales.

Researchers used Ecopath with Ecosim, a computer model that works with ecosystems and food webs, to explore how the food web would be affected based on a handful of different scenarios. For example, reefs in the Choptank River system are currently considered by the researchers to be “young reefs.” Restoration there was completed in 2015 in Harris Creek and is still under way in the Little Choptank and Tred Avon rivers. How would having mature oyster reefs (roughly 15 years after restoration) affect the number of blue crabs? Or what would happen to the blue crab population if the sanctuaries were opened to oyster harvest?

The study is geographically focused; conditions in other parts of the Chesapeake Bay (salinity, temperature, turbidity, levels of fishing effort, and other parameters) are different. Results in this study cannot necessarily be transferred to other parts of the Bay. But now that the models and methods have been established data from other systems could be utilized to explore ecological and economic outcomes.

More details, including a look at each of the five scenarios the researchers explored and a significant amount of data, graphs, and charts, are available in the Technical Memorandum.