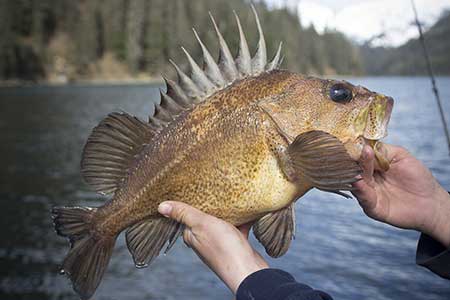 Some rockfish have amazing lifespans. A rougheye rockfish was documented at 205 years old, and a shortraker at 175 years old. Seven species have been documented exceeding 100 years in age.

Rockfishes are long-lived marine fishes that fertilize internally, versus egg laying fish that are fertilized externally. They are also considered matrotrophically viviparous. Wait…what’s that you say? Rockfish are magically delicious?? Well yes, that too– adult rockfish are delicious, but what is meant by matrotrophy is that many rockfish species provide a form of maternal care during embryo development where additional nutrients or energy are transferred directly to the embryo from the mother (think of something like a placenta). However, there is a high degree of variability in maternal energy contribution to embryos among species of rockfish. In addition to internal fertilization and matrotrophy, large rockfish can give live birth to MILLIONS of babies. This is where the term viviparous comes from (literally it means “giving live birth”).

Rockfish have other noteworthy life history characteristics. One is their closed (physoclistic) swim bladder. Unfortunately, this type of swim bladder cannot vent. When rockfish are caught in deep water and brought to the surface, water pressure decreases and the air in their swim bladder expands. It can expand so much it pushes the stomach out of the mouth of the fish. In some species the swim bladder ruptures. Gases dissolved in the blood also come out of solution, forming air bubbles in the blood vessels of eyes and internal organs. The expanding gases can leak into other areas, including spaces behind the eyes, causing them to pop outward. Injuries caused by bringing rockfish up from deep water are collectively called “barotrauma.” However, not only do barotrauma injuries reverse or repair themselves if a rockfish is released back down to the depth after capture, studies in Alaska have found that yelloweye rockfish are still able to reproduce 1–2 years AFTER being released back to depth with a deep water release mechanism. This release method for rockfish is highly encouraged throughout Alaska and required by charter operators in Southeast Alaska. 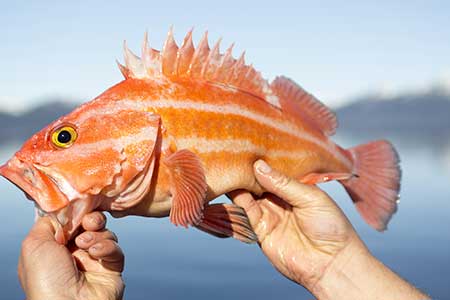 Rockfish are an amazingly diverse group of fish with more than 30 species found in the Gulf of Alaska. Many species, including yelloweye, are extremely long-lived, and do not reach sexual maturity until they are well into their 20s. 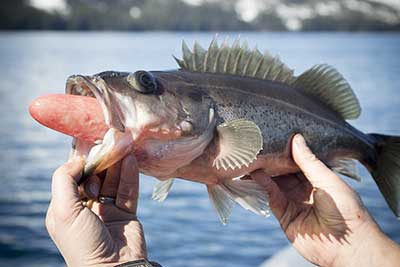 Although nearly half of all rockfish caught are released, rockfish have a “closed” swim bladder which results in their inability to quickly regulate swim bladder pressure. When they are brought to the surface from depths greater than 90 feet, many die. A study found that regardless of external barotrauma signs and capture depth, yelloweye rockfish had remarkably high survival (98%) if they were released at the depth of capture within a couple minutes of reaching the surface.

A more detailed article about barotrauma and deepwater release of rockfish

How to deep water release

How rockfish are aged

This four-minute video demonstrates the use of a variety of rockfish release devices.