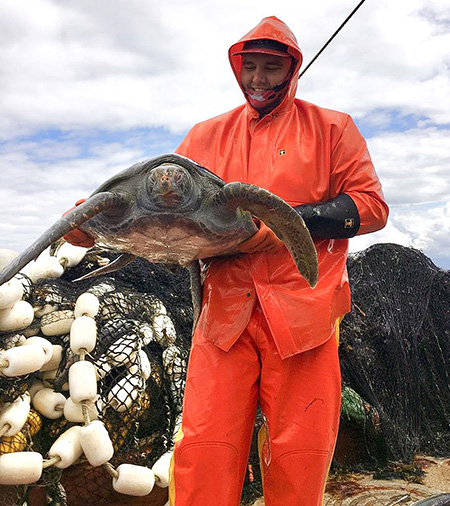 Jes Boyd with the green sea turtle before returning it to the water.

Sea turtles are a rare sight in Alaska waters, but on Aug. 5, 2020, a purse seiner just south of Prince of Wales Island came across a green sea turtle.

The crew was concerned that the turtle might become entangled in their seine net, so they brought it on board temporarily before releasing it unharmed. Fisherman Jes Boyd estimated the turtle weighed about 40 pounds. Green sea turtles can weigh 300-350 pounds, and this animal would still be considered a juvenile.

Boyd wrote that, “… we’ve had 60F+ water temps everywhere except Nichols pass, so it’s been warm. We were catching lots of moon jellies this morning before the turtle showed up, I guess they like to eat them.”

Biologist Dr. Jeffrey Seminoff concurred with Boyd. Seminoff is the leader of the Marine Turtle Ecology & Assessment Program for NOAA, at the Southwest Fisheries Science Center in San Diego, California. He said that green sea turtles eat a mix of plants and animals as youngsters, especially in the open sea, but their diet shifts as they mature – adults transition to an herbivorous diet and feed in nearshore habitats, eating mostly algae and seagrasses.

“They are not total herbivores,” he said. “They are opportunistic, omnivorous animals. They eat anything they can get their mouth around – tunicates, floating things, jellies, anything in the water column. We’ve documented them eating moon jellies, so it probably was foraging as he suggested.”

Seminoff said there are three populations of green sea turtles in the Eastern Pacific, based on their origins in Mexico, Costa Rica, and the Galapagos Islands. The Alaska turtle most likely hatched on a beach in southern Mexico and then headed out to sea.

He said most green turtles live in near shore habitat as adults, and some remain in the open ocean as pelagic animals. He said green sea turtles along the Pacific coast of the Americas tend to spend more time in the open ocean than any place else in the world.

“I’d assume it’s been out there its entire life,” he said. “It’s likely a pelagic turtle.”

He said the prevailing currents along the west coast run south, but further offshore, towards Hawaii, currents can run northerly. A pelagic turtle like this one probably passively drifted with the currents prior to arriving in Alaskan waters.

“It was probably meandering slowly northward, and not directionally swimming,” he said. Following its brief encounter with the friendly seiner in the waters of southern Southeast Alaska, currents would probably move it south.

“It would likely meander south until it found a suitable habitat that is warm year-round,” he said.

He said if it did remain in Alaska waters it would likely die as fall approached. While an Alaska fisherman might consider 60-degree water to be warm, it’s not warm to a sea turtle. Seminoff said it would be able to maintain some activity in water temperatures in the low 60s, but it would be lethargic. 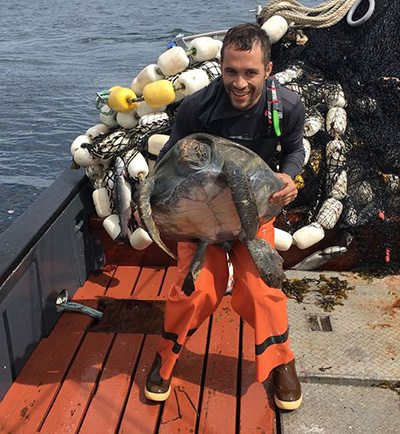 Barbara Mahoney is a biologist with the National Marine Fisheries Service in Anchorage. She said because of currents, sea turtles that are sighted in Alaska waters tend to be seen in late summer, but have been found in winter months and would likely succumb to hypothermia in colder months. Between 1963 and 2020, 21 green sea turtles were documented in Alaska waters, some as far west and north as Homer and Kodiak. Six, counting this one, were alive.

Green sea turtles are listed as threatened under the Endangered Species Act.

The last sighting of a sea turtle in Alaska waters was Dec. 3, 2010, when Dennis Diamond found a freshly dead sea turtle on a beach near Ketchikan. Diamond found the 171-pound, three-foot-long turtle about 10 miles northwest of Ketchikan. ADF&G veterinarian Kimberlee Beckmen conducted a necropsy.

The cause of death for that turtle was bronchial obstruction and lung collapse, and there were two types of plastic bags and a wad of monofilament fishing line in the stomach. The digestive tract had become infected and inflamed.

In November 1999 another dead green sea turtle was found just south of Ketchikan. Another was found dead on a beach in Eliza Bay on the southern end of Admiralty Island.

A live green sea turtle was found on the Copper River Flats near Cordova in 1996 and transported to Sea World in San Diego, California. That animal was rehabilitated, tagged and later released.

Jes Boyd, the fisherman, hopes sharing his experience will raise awareness of sea turtles. He has an appreciation for science and began seining in 2011 after earning a degree in chemistry. Working at sea has provided some interesting sights. He wrote, “For sea critters I have seen wolf eels, lump suckers, the usual sea mammals (porpoise, seal, sea lion), salmon sharks, and the most interesting looking logs – like something out of a sci-fi movie – covered completely in gooseneck barnacles.”