SALT LAKE CITY — If you own a large cabin cruiser or houseboat that has been in a slip at Lake Powell for more than a couple of weeks, you will need to do some advance planning and preparation before you can take your boat out for an afternoon on the lake, especially if it will be leaving from Page, Arizona, or Big Water, Utah. 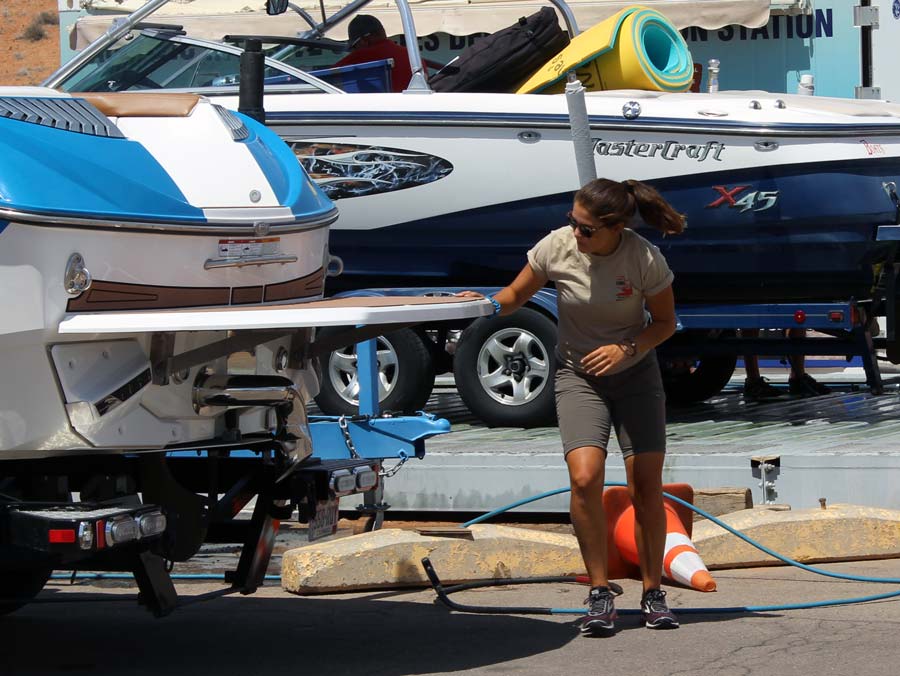 Boat owners who have stored their boats at Lake Powell should expect to find a layer of quagga mussels on their watercraft.

Boat owners who have stored their boats at Lake Powell should expect to find a layer of quagga mussels on their watercraft. Mussels are reproducing throughout the entirety of the lake and with a lower water levels, more boats will have mussels attached to their vessels than in past years. Currently, the only Utah waterbody with quagga mussels is Lake Powell, and the Utah Division of Wildlife Resources and Utah State Parks would like to keep it that way.

“Lake Powell is low, and the mussels are reproducing,” Scott Dalebout, the Utah Division of Wildlife Resources statewide operations lieutenant, said. “They are spreading as fast as ever, so we all have to be diligent to stop them from spreading to other waterbodies.”

Boats that have been in Lake Powell must be professionally decontaminated by a state certified decontaminator and allow for a 30-day drying period before launching at other Utah lakes. However, even if a boat owner plans to only use their boat at Lake Powell, the National Park Service does not allow a boat to re-enter the lake without the mussels first being removed off-site.

If a boat has been docked in the water all winter, it will be heavily covered in mussels and will have to be cleaned before it is relaunched at Lake Powell. Otherwise, boat owners risk having their water-intake systems clogged, which will burn up motors, pumps and other equipment.

While DWR offers several free stations where boaters can have their boats decontaminated if mussels are not attached, the staff can not accommodate houseboats or other large watercraft, due to the time required to flush all systems and the high demand of day boater decontaminations. Owners of large boats will need to contact one of the two private businesses that offer decontaminations: Mussel Busters in Page and Antelope Point Marina Dry Storage. Boat owners will need to schedule an appointment likely a few weeks in advance. After decontamination begins, the time to completion could range from a few hours to a couple of days — depending on the level of encrustation — and the cost will depend on the amount of time required to fully clean the boat.

“A person cannot just show up and expect to be immediately decontaminated,” Dalebout said. “An appointment must be made well in advance. I would suggest planning and scheduling an appointment at least two weeks prior to when you want to actually remove your boat from the lake.”

It is illegal to transport a boat in Utah that has quagga or zebra mussels attached to it and hasn’t undergone a professional state certified decontamination. So boat owners will have to have their boat decontaminated in the Lake Powell area, rather than transporting it to other parts of the state to be cleaned. It is a Class A misdemeanor for a person to move a watercraft with mussels, and individuals can face fines as well as their watercraft being seized.

“If a person wants to remove a houseboat or large cabin cruiser that has been in the lake for an extended amount of time, and they wish to remove it because it will most likely have mussels, it will need to be inspected and most likely decontaminated before moving,” Dalebout said. “We are in the busy season now, which means planning ahead is crucial.”

Steps for decontaminating a boat

To help prevent the spread of quagga mussels, after you are done boating at Lake Powell or anywhere out of state, you must do the following to decontaminate your boat:

Why are quagga mussels so bad?