Fourth-of-July is Wisconsin’s busiest and best boating holiday, which makes it a great time for the annual Clean Boats, Clean Waters Landing Blitz, July 3 -7. Department of Natural Resources staff, volunteers and regional AIS partners will be at boat launches statewide to remind people that the power to protect against harmful species is shared by all who love Wisconsin’s waters. This year, Wisconsin’s effort is part of a larger event happening throughout the Great Lakes region from June 28-July 7. 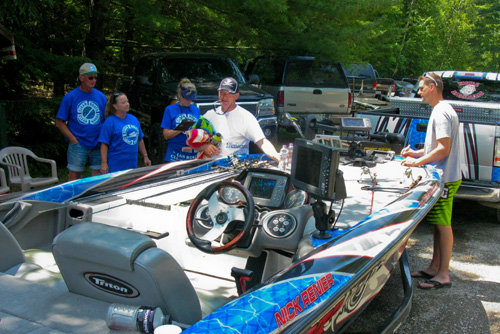 Volunteers consult with boaters to underscore importance of cleaning their boats to prevent spread of invasive species.Photo credit: DNR

Aquatic invasive species, or AIS, such as Eurasian watermilfoil, spiny water fleas and zebra mussels, pose great risks to the health of our waters and fisheries, and there are often no known control options to rid the waters of these species. Prevention is the key and it’s in the hands of visitors as well as full-time Wisconsinites. More lakes than ever are participating in 2019 with inspectors giving away Stop Aquatic Hitchhikers boat towels.

“This is the first time that these valuable educational events will be held simultaneously across the entire Great Lakes region. It’s a chance to work directly with boaters and deliver a coordinated, regional message about the importance of AIS prevention during the busiest boating weekend of the year,” said Bob Wakeman, DNR’s statewide AIS coordinator.

Volunteers, AIS partners and DNR boat inspectors will be on hand at landings around the state to demonstrate the prevention steps and answer questions about invasive species. Their efforts will build on the success of last year’s campaign during which volunteers inspected almost 9,000 boats and spoke with more than 18,000 people.

“One of the most exciting things about this campaign is the strong volunteer effort. Every year hundreds of concerned citizens participate as volunteers to help us raise awareness and empower boaters,” says Wakeman.

Invasive plants and animals can spread easily by hitching a ride on boats and other equipment, including trailers. They can also hide in the water in livewells, bait and fish buckets and motors, so it’s important to drain those and drain your boat. Because many invasive species can also be hidden in mud, it’s vital to clean off anchors.