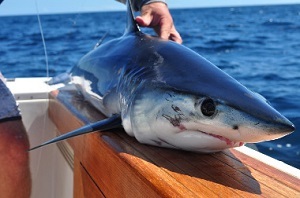 New York’s marine waters provide important habitat to many shark species! Commercial and recreational fishing for sharks have been practiced for hundreds of years and has influenced many of New York’s coastal and fishing communities. Before shark fishing, you must apply for the NYS Recreational Marine Fishing Registry and a NMFS Highly Migratory Species (HMS) Permit.

If you catch a prohibited shark, please remember the following best practices:

Tagging sharks does not exempt you from regulations and enforcement actions.